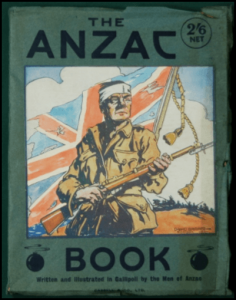 The Anzac Book was an instant success when it was released in 1916. It was an anthology of poems, stories, colour illustrations and cartoons. It was written by soldiers on operations who were suffering a harsh Gallipoli winter.

In November 1915 a committee was formed to produce the publication and a notice seeking contributions was circulated at Gallipoli. Prizes were offered for various categories and 150 submissions were received, although not all were incorporated in the book. After the evacuation of Gallipoli, official war correspondent Charles Bean and his assistant, Arthur Bazely, edited the contributions.

Over 100,000 copies of the book were sold. About half went to the AIF and many could also be found in Australian households. In 2010 the Australian War Memorial reprinted a quality reproduction of the book with a new foreword by author Les Carlyon and an introduction from AWM historian Ashley Ekins. The hard-cover reprint of 240 pages also includes material originally rejected by Charles Bean. The book is available through the AWM online shop. It can be viewed online from the National Library website at: http://nla.gov.au/nla.obj-19061379

This poem is a contribution in the book by Capt James Sprent:
A.M.C. (attached 3rd Field Ambulance.):

A CONFESSION OF FAITH

Who would remember me were I to die,
Remember with a pang and yet no pain;
Remember as a friend and feel good-bye
Said at each memory as it wakes again?

I would not that a single heart should ache
That some dear heart will ache in my one grief.
Friends, if I have them, I would fondly take
With me that best of gifts, a friend’s belief.

I have believed, and for my faith reaped tares;
Believed again, and, losing, was content;
A heart perchance touched blindly, unawares,
Rewards with friendship faith thus freely spent.

Bury the body – it has served its ends;
Mark not the spot, but “On Gallipoli,’
Let it be said, “he died.” Oh, Hearts of Friends,
If I am worth it, keep my memory.

Capt Sprent was born in Table Cape, Tasmania in January 1883. He was a medical practitioner who qualified in Edinburgh in 1909. With the rank of captain, he was enlisted in the First AIF, departed Hobart in July 1915, and joined the No 1 Australian General Hospital at Heliopolis, Egypt. He served in Gallipoli and France. In November 1916 he was awarded the Military Cross. Then in January 1917 he was promoted to Major and served with 13 Field Ambulance.

Advice to Dr Sprent’s wife in April 1917 stated that he had been evacuated to 3rd London General Hospital with a gun shot wound to the chest, which was described as mild. Later in the year Dr Sprent returned to Hobart and was discharged. He became the first medical officer of the Repatriation Department, Hobart. When he died at age 66 in 1948, Dr Sprent was a well-known and respected Hobart identity.

The latest issue of our Diocesan newsletter, Serving Faithfully, is available now.