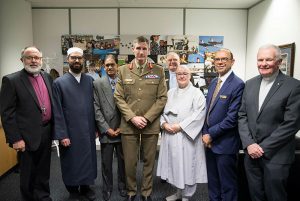 Islamic, Hindu and Buddhist faiths are now represented on the Religious Advisory Committee to the Services (RACS) after an updated Memorandum of Arrangements (MOA) was signed in Canberra on June 12. The committee has provided a link between the Commonwealth and major faith groups since WWI.

It functions under a MOA between the CDF and the major faith groups and meets quarterly in Canberra. RACS Chair Reverend Murray Earl said committee members are senior representatives of Australia’s major faith groups. “Previously RACS was constituted by Jewish and Christian members,” he said. “This is the beginning of involvement by Islamic, Hindu and Buddhist representatives. The major difference for RACS is that the updated MOA is now multi-faith.”

RACS provides advice to Defence on religious matters and seeks to ensure provision is made for ADF members to practise their faith within operational constraints. The committee also recruits and accredits chaplains suitable for the ADF’s multi-faith environment.

During the signing of the MOA, CDF Gen Angus Campbell said that physical, mental and spiritual health were essential for Defence personnel. “In an increasingly multicultural ADF, it is important that Defence is able to meet the service-related spiritual and religious needs of its members,” he said.