(above)   Eight WWII Veterans from the 1945 Borneo Campaign with Chaplain Paul Stuart and members of the Federation Guard at a ceremony in Brisbane before they all departed Australia for Borneo to conduct 10 days of 70th Anniversary commemorations in Sandakan, Balikpapan, Tarakan, Changi (POW Prison) and Brunei.

(below)   Amina with Fr Paul Stuart. She was one of many Borneo indigenous who suffered at the hands of Japanese military occupation forces and help Australian military. 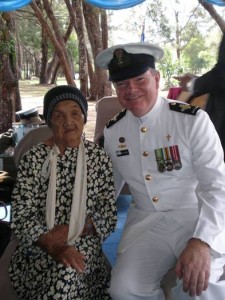 In the dying days of World War II one large island still remained in control of an invading aggressive Imperial Japanese military – Borneo.

Among the allies, Australia and the United States bore the task of defeating the Japanese in a region now composed of Brunei, Singapore, Malaysia, Thailand and Indonesia.  Commanding the Australians was General Leslie Morshead alongside the US Commander, General Douglas MacArthur. Their 35,000 strong force faced off against 15,000 Japanese commanded by Vice Admiral Mickiaki Kamada (notorious for ordering the beheading of many Australian POW’s and executed for war crimes in 1947), and General Masao Baba (executed in 1947 for war crimes resulting in the deaths of 2,200 Australians).  Borneo saw some of the worst brutality by the Japanese against the indigenous people of the nations they invaded in WWII and some of the worst atrocities against captured or surrendered allied military.

Emotions ran high at each and every memorial and gravesite. Age has wearied these veterans who tearfully paid respect and homage to their mates who were denied the chance to live a full life, to see Australia again, to reunite with parents, wives, sweethearts or children.  Instead their remains lie in the soil for foreign lands where unimaginable horrors took their toil upon them and often their lives.  The Australian war graves at various locations in Borneo are beautifully kept attracting many visitors.  It was wonderful to see the old veterans, full of stories both funny and sad, sharing their experiences with the young serving ADF members (Federation Guard and drummer and bugler) accompanying the group.

It was a privilege to hear their stories and experience first-hand the terrain and climate they risked their lives in to defeat an evil aggressor that had evil designs of conquest upon the whole Asian-Pacific world.  I’m grateful to Monsignor Stuart Hall for being tasked to be Chaplain to this  Veterans’ Mission and appreciate even more the bonds of mateship and hardship that battle and imprisonment forges and how the human spirit, often strengthened by Faith, can overcome extreme challenges.   Seeing old Aussie veterans tearfully bowed over the grave of a mate not seen since 1945 as they kiss and place a poppy at the headstone in Kranji or Tarakan; Seeing murals of Christ and Gospel scenes of hope and mercy line the Chapel walls of that hell-hole Changi prison that were painted by a gifted POW; Seeing the crowds, young and old – some survivors of WWII themselves, out in force cheering the veterans in gratitude for the liberation they won, will be among the many memories we will treasure who were part of this remarkable act of Remembrance.