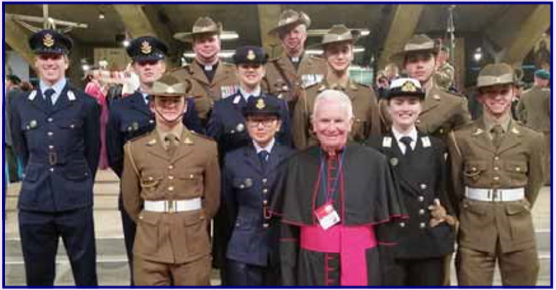 On 11 February 1858 Bernadette Soubirous at Lourdes in the south of France was collecting firewood with her sister and a friend near a grotto when she had the first of Marion apparitions that continued to 16 July that year. During the course of her short life (she died at the age of 35) Bernadette received an astounding 18 visions of the Blessed Virgin Mary. Bernadette was told to by Our Lady, ‘Go drink at the spring and wash yourself there.’ and ‘She has told me to tell you that she wishes to have a chapel at Massabiello.’ Besides that she said, ‘I wish people to come here in procession.’ Of course, the Chapel was built and people from all around the world come to the Grotto to wash and drink and process while the Rosary is prayed.
After World War II French soldiers and their chaplains invited German soldiers and their chaplains to gather and pray together. This initiative sought to heal memories and reconcile the past by recognising their common identity as Christians in need of peace. Since 1958 the pilgrimage has expanded to include additional countries of Europe, the Americas and other countries. For us in Australia it is not the first Military Pilgrimage and also not the first gathering of the Australian Defence Force Academy Catholics. Fr Damien Ellis, Chaplain ADFA, had organised retreats and a Mission trip to Fiji last year. He sought the permission and guidance of Bishop Max Davis and Mgr Peter O’Keefe to take young men and women from ADFA on this significant pilgrimage – for some it would be their first trip outside Australia.
We were a small but determined delegation that departed Sydney, conscious of the forthcoming 100th anniversary of Armistice day and also the Battle of Hamel, that some argue changed the course of WW I because of the successful tactics of using combined arms against an entrenched enemy. Once more the iconic Slouch Hat was seen wondering the streets of a French Village – the Australians are here! The delegation was led by Fr Damien Ellis, assisted by Deacon Brenton Fry (RMCD), who was accompanied by his wife Genyese, Mons Peter representing Bishop Max, and nine members of the Defence Academy student body.
The hard work was undertaken by OCDT Lachlan Chadwick in writing the administration instruction. As the President of the ADFA Catholics, he was also the flag bearer of the delegation.
First stop was at Toulouse where the group married up with Mons Peter and conducted a whirlwind tour of the Boeing Factory, which was appreciated by all; this was followed by the train journey into Lourdes, where Deacon Brenton and his wife, Genyese, met the Cadets at the train station ready to transfer their luggage to their accommodation where they settled in and prepared for the opening ceremony conducted within the Basilica of Saint Pius X, which is underground. The Basilica was at capacity with some standing. In excess of 25,000 pilgrims were all on their feet as the country flags were processed to take their place around the altar.
The hustle and bustle of the streets immediately outside St Joseph’s gate had to be experienced to be believed with much interaction with the many different nations’ Soldiers, Sailors and Airmen/women in attendance. It was with much joy that Fr Damien accepted an invitation for our group to attend a garden party hosted by the British Armed Forces; this gave all an opportunity to engage with peers, Defence Attaches, three‐star Generals of all Services in renewing the strong bonds between Australian and Britain. Our Cadets certainly held their own with MIDN Sarah‐Jane Brown being invited to a Royal Navy luncheon the next day.
Perhaps SCDT Chadwick explains it best when he said, ‘The pilgrimage for me was a unique and interesting experience. I wasn’t sure what to expect before I left to go and I had the added bonus of being the head cadet for the group, which presented its own challenges. Upon arriving I was amazed at how friendly everyone seemed to be, it really blew me away. Nowhere had I ever been before was there so much mateship and cohesion amongst strangers; it was truly an amazing and spiritual experience to know I had a friend everywhere, even if we didn’t speak the same language. No matter what time of day or where we were in the town I always felt God with me. Even when things looked bleak or plans didn’t work I had no worries as I knew He would provide. I am sure the Lord was with everyone who attended, after all how can you explain 20,000 military personnel drinking together and not a single incident of violence being recorded or witnessed. I am grateful for the experience and I certainly believed that God wanted us there and for us to continue going. This is definitely not the only time I will go, I look forward to going again and bringing new friends next time.
‘The highlights of the Pilgrimage were the time spent reflecting on the apparitions at Lourdes by each member; the procession of the light on the Saturday night; and of course, the concluding Mass, again conducted in the Basilica of Saint Pius X, a very solemn occasion. We give thanks for Fr Damien’s ministry in Christ at ADFA; and for his guidance, fellowship and being a driving force behind ADFA Catholics whose numbers continue to grow. Our expectation is that our next pilgrimage will have even bigger numbers. Thanks be to God!